2017 was the year of the crypto! Bitcoin raised to all times high, and all the altcoins followed suit. While I have been making up my mind about it, Gestoeber my partner in life and the Financial Independence goal has a clear view of the crypto world.

Here’s why he is sceptical about all things crypto. 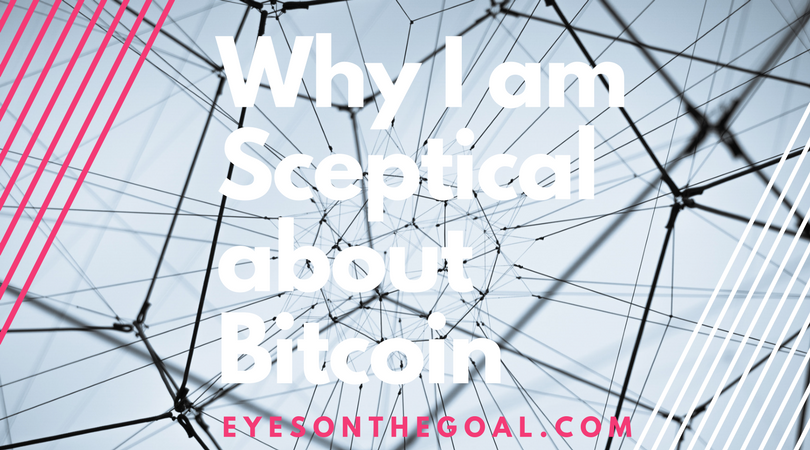 I don’t see any future of Bitcoin

I know that this is a bold statement, but hear me out.

Bitcoin was intended to replace normal currencies. The goal was to make it the universal currency, not controlled by any government and not bound to any border. You should be able to go to any country, pull your phone out and pay for your coffee or a service like you would at home. It was the ultimate Utopia of freedom.

You could do this, for a brief moment in some places, but the system is broken as of today.

How the blockchain technology works

Let’s say you want to buy a coffee with a blockchain based currency, be it Ether, Bitcoin or Litecoin. You go to the cashier, put out your wallet app and start the process of transferring the “coins”. At that moment you create a transaction that will be registered in the coin network.

The network collects all transactions in a ledger, but to make the transaction legit, it has to be in the blockchain. This is the responsibility of the Miners. They take all transactions in a period of time, bundle them together into a block and solve a cryptographic riddle. The block has limited size and therefore a limit on the number of transactions. Solving that riddle is called ‘proof of work‘ because you proved, that you put in the effort and therefore you are eligible for getting the reward.

The nature of the riddle is different for every coin, but the result is the same. The first miner who solves the riddle, will create the block and get a reward for it in the coin currency. All the other miners have wasted their time, their effort is gone. Only the first one will get the block.

The reward for finding the block decreases over time. But a calculation of all possible solutions for the riddle consumes power. On top of that, the machines that are calculating it are expensive. So eventually the reward turned out too small for the miners. That is where the transaction fees come into play. Miners will only accept to mine a block if the reward plus the transaction fees will cover their costs plus a yield they want to achieve.

Because of the decreasing reward over time and the increasing amount of power needed to mine Bitcoin, the transaction costs exploded. And here there is the first reason why I see Bitcoin sceptical for our society, our environment, and our economy.

But the Bitcoin network is creating only one block every 10 minutes. One block, covering all transactions that happened within the last 10 minutes. Eventually, the Bitcoin community realized, that they need to lower the transaction costs and speed up the block generation. So they created an update, called Segwit2x that will double the block size to a whopping 2 MB. It will cut down transaction costs for a moment, but the problem will return in the future.

Additionally, there are some issues with updating a network. Some participants could refuse to upgrade and continue to build on the old protocols. That and other actions could lead to a cryptocurrency fork. A new path splits from the old one and both paths are going on their own way. In fact, that is what happened previously and the reason, why there is now Bitcoin Gold and Bitcoin Cash.

Another problem we see in Bitcoin is Deflation. The effect of deflation is as worse as inflation. People wouldn’t spend their money anymore because they fear to miss the next big increase in value. If something is worth 100% more after only one month, I would keep it and won’t spend it anymore. Why should I spend it today? If I spend it next month for the same goods, I will only have 50% of what it is worth now. That is the thinking in a deflating economy and it will slow down the economy until nobody trades anymore.

Also, the 20% volatility of jumps during one day makes it impossible to trade with it. Think about it: you cannot be sure, that a price you agreed with someone one hour ago, will be better or worse the next hour.

The only thing that helps in that scenario is a reference currency. The price is made in that stable currency, but the transaction is done in a specific moment. Both parties agree, that the price is worth a specific amount of bitcoin at this exact moment. That is the opposite of replacing a currency because you need that stable currency to come up with a fair price (that lasts longer than a moment).

Let’s get into the environmental issue. The proof of work gets harder and harder. The energy consumption will grow. The energy used by all the miners, who don’t get the block is wasted. It is a massive waste of energy! Right now the cryptocurrency community uses as much energy as the whole country of Ireland.

How would it be, if the transactions in Bitcoin reach a massive scale when everything is paid with Bitcoins? The impact of our environment will be unbelievable. In fact, mining is moving to countries, which produce their energy either in a renewable way or to countries that have very cheap but old coal-based plants like China. You can imagine how it would be, if a country like China decides to create more of these cheap energy sources, to meet the demand.

The fictional scarcity of Bitcoin

I don’t get what people make believe, that a Bitcoin has a value in, let’s say, 5 years? The enthusiasts say, Bitcoins are limited to 21 million. Therefore it will always be scarce, but is it really? It’s only software and as we have seen, it could just be forked. A new Altcoin (an alternative coin) could enter the market and here we go again. I know, that our normal currencies don’t have any relation to something physical either. But if a good amount of people lose faith in bitcoin, it will crash.

This loss in faith could come if we spin for example the environmental argument around. What if several countries decide, that the impact is too high and forbid the mining of cryptocurrencies altogether? Mining would become economically impossible, the handling of the transactions will slow down or stop. The people would try to save what they “earned” so far. It would be a panic, resulting in a flash crash like in the tulip bubble in the 17th century.

Although other cryptos face the same problems, they are starting to implement solutions. Ethereum, for example, plans to move from the proof of work concept to one called proof of stake. The miners who handle the block creation and the transactions “freeze” some Ether, the currency behind the platform. This frozen Ether is the stake they put at risk, security for their work if you will.

In a network, other parties are constantly checking the blocks created by others to verify their work. If they don’t, their stake will be lost.

This concept solves the problem, that energy is wasted by the countless miners, that don’t get the block. It will be faster and therefore the network could handle way more transactions.

Don’t get me wrong, I do not say “Don’t get invested”, but be very, very careful. Diversify your investments, don’t put all the money on just one coin. Most importantly don’t put more money in, than you can afford to lose.

Here is a video covering the same content. (in German).

Freedom seeker, you liked Gestoeber’s article? Go check out all the other interviews from the Freedom Seekers Community series.

Photo by William Bout on Unsplash

Hi, I am Kate App

Katerina Apostolova is a participant in the Amazon Services LLC Associates Program, an affiliate advertising program designed to provide a means for sites to earn advertising fees by advertising and linking to Amazon.com